How is Sentiment Assigned?

Understand what Sentiment means, how it works, how it is scored, and why it matters

Written by Whitney W.
Updated over a week ago

Curious about the assigned sentiment of an article or mention? Read below to learn more about how to measure sentiment:

Sentiment is defined as "a view of or attitude toward a situation or event; an opinion." Sentiment analysis analyzes a body of text to determine the opinion expressed by it. The opinion is then labeled either more Positive or more Negative. This is called Polarity. The overall sentiment is then determined to be either Positive, Negative, or Neutral, based on the total polarity score. If something is both positive and negative, but more positive, the polarity score would rank it as positive.

Sentiment shows the overall tonality of any given article or mention. This provides a look at each result and consolidates the message's tone into either positive, negative, neutral, or not rated. These are derived from our natural language processing (NLP) algorithms. It helps give context to the result and, holistically, provides an overview as to the tone of your search, your brand, or relevant topics to you.

Below are a few examples of Sentiment applications within Meltwater.

Positive. Here, a user is exclaiming love for a Coca-Cola campaign. 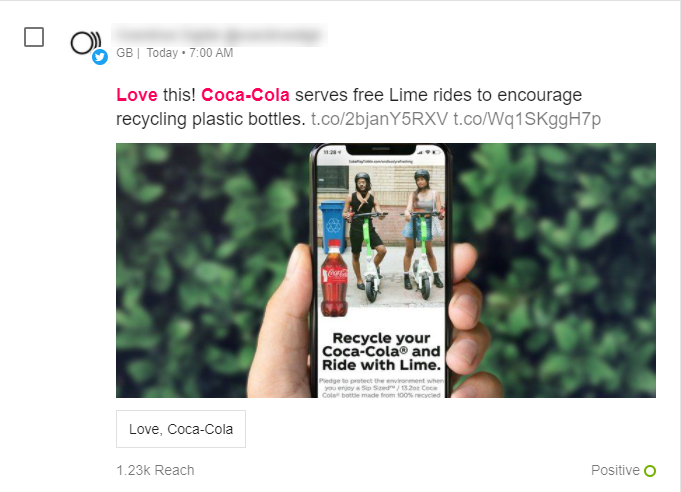 Negative. This user is displaying negative emotion towards the taste of a Coca-Cola product.

Neutral. This user is simply stating a fact about a Coca-Cola collectable, with no emotion implied.

Now for a tricky one. NLP and Sentiment Analysis is highly accurate, but not perfect. Slang, sarcasm, inference, and subtext, can all alter the way you perceive sentiment versus someone else. Two people might even look at the same message, and have differing opinions of sentiment! Here is a good example:

This user mentioned they like Pepsi, which would be positive for Pepsi.

This user mentioned Pepsi and Coca-Cola, but not RC Cola. Would this be negative, positive, or neutral for RC Cola?

We use this example to highlight that even with NLP, context still matters when determining sentiment as it relates to the overall goals within your results. Sometimes you may not agree with an assigned sentiment, and that is okay! Read the next section to see how to Override Sentiment within Meltwater.

With Sentiment Override, you have the ability to assign or change a sentiment assessment of a document or mention.

If the document has duplicate articles, a pop-up window asking 'Apply to All Documents?' will appear. Make your selection to either apply the sentiment to all duplicates or to just one selected result.

Once you have assigned a new sentiment rating, the sentiment icon will no longer be hollow.

You can override sentiment in the content stream with bulk selection instead of overriding each result individually.

Note: if you select more than 500 documents or select the "select all" box at the top of the content stream and click "select all total results" the sentiment emoticon will disappear as no more than 500 results can be changed at once.

Within Dashboards there are two widgets that can help you understand the overall tonality of a group of articles, these are named 'Sentiment' and 'Sentiment Score'.

To get started with a reporting dashboard in the Meltwater platform, please see this screen tour here.

Sentiment - This provides a look into the volume of documents assigned a tonality score of positive, negative, or neutral. It helps give context to the article and, holistically, provides an overview as to the tone of your search, your brand, or relevant topics to you. This graph can be displayed in the following chart types: donut (as seen below), line graph, solid bar, or pie.

Sentiment Score - It sums the percent of positive articles against the negative articles, ignoring 'neutral' articles.

You can now search by entity-level sentiment!

Using the new boolean for granular sentiment, you will be able to retrieve articles and posts where a certain entity (e.g. your brand, competitor, or product) is mentioned in a negative or positive sentence, while the overall sentiment of the document may be different.

For example, this query will return all documents where Tesla was identified as an entity and appeared in a negative sentence:

To find positive results, change the sentiment variable from v (negative) to p (positive), like this:

To cover multiple versions of the entity, you can expand the name section to an OR query:

In instances where two or more entities are mentioned in the same sentence with different sentiments, the sentence sentiment will be assigned based on the majority combined sentiment.

For example: Coca Cola is the best, I don‘t like Pepsi.

This sentence is more positive than negative, so all detected entities in this sentence will receive a positive sentiment.

Entity searching is not yet available for social channels where a brand is mentioned as @handle, rather than with a name written out, such as Twitter.

We continue to add more languages to our NLP and modern deep learning models regularly so that we can continue to improve accurate sentiment detection and retrain languages when needed.

Need more help? Feel free to reach out to us via Live Chat or check out our Customer Community.

Find answers and get help from Meltwater Support and Community Experts.

Did this answer your question?